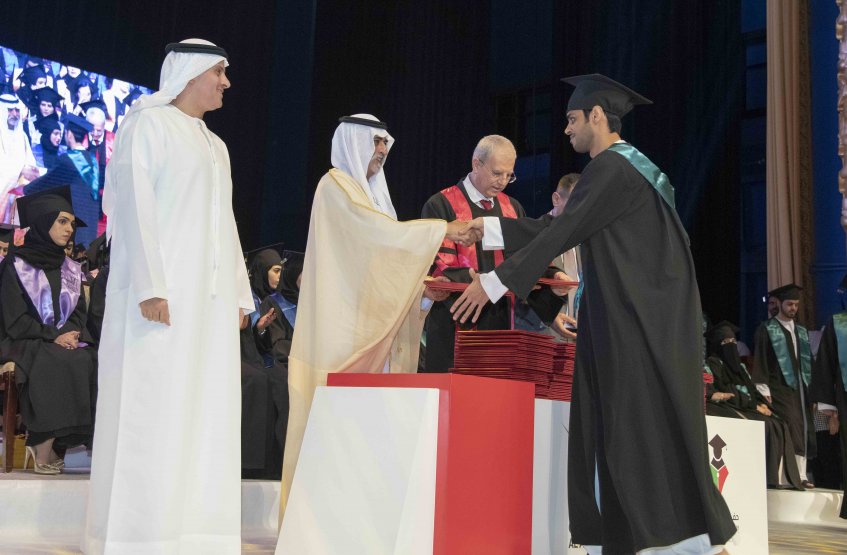 His Excellency Sheikh Nahyan bin Mubarak Al Nahyan, Minister of Tolerance, attended the graduation ceremony of the 2019 'Year of Tolerance’ batch from Al Ain University in its both campuses Abu Dhabi and Al Ain.

The ceremony, which had 370 graduates from the university's undergraduate, graduate and Professional Diploma, was held at the Emirates Palace in Abu Dhabi, and was attended by a number of ministers, representatives of diplomatic missions in the UAE, members of the Board of Trustees, the colleges Deans, the AAU academic and administrative staffs, as well as, the graduate’s parents.

The graduation ceremony started with the National Anthem and the graduate’s speech by the graduate, Ahmad Al Naqbi, from the College of Business. He congratulated his fellow mates, wishing them success in their future. He also provided a special thanks for the HE Sheikh Nahyan bin Mubarak Al Nahyan, and for the Al Ain University.

In his speech, HE Sheikh Nahyan, congratulated the graduates and wished them all success. He also expressed his pride in the graduation of the year of tolerance batch, which represents the strong relationship between education and tolerance.

His Excellency pointed out that the annual celebration of graduates reflects the continuous successive achievements and progress achieved by Al Ain University, stressing that Al Ain University occupies a prominent position between other universities in the region, a university that holds international academic accreditations for its colleges and programs. He also thanked AAU for its cooperation with the Ministry of Tolerance this year in organizing successful summer camps for school students.

At the end of his speech, His Excellency expressed his great pride on the UAE and the deep respect to the UAE's leaders, starting with its great founder, the late Sheikh Zayed bin Sultan Al Nahyan, who believed in the role of education and was keen to develop the energies of the UAE's sons and daughters and enabling them to take full opportunities to contribute to all aspects of human activity in society and the world. He also thanked His Highness Sheikh Khalifa bin Zayed Al Nahyan, the UAE.

The Minister of Tolerance, accompanied by the AAU Chancellor and the AAU President, presented certificates to graduates from various colleges and academic programs, ranging from engineering, pharmacy, law, education, humanities, and social sciences, business, communications, and media.

Dr. Noor El Deen Atatreh, AAU Chancellor, commented: "We are proud to graduate a new generation of educated young people. This scientific achievement would not have been achieved without a wise leaderships’ vision for the future." He added: "Al Ain University is proud that its graduates carry the title of the Year of Tolerance Batch”.

Prof. Ghaleb El Refae, AAU President expressed his happiness to the Year of Tolerance graduates 2019 and said: "Today you are carrying the message of knowledge, values, morals and youth's determination, a bright future awaits you, we hope you will be crowned with success and excellence".

This batch, bearing the motto of "The Year of Tolerance” emphasizing the values of tolerance, coexistence and openness to different cultures.